The sessions of the Youth Action Week took place in Palais de l’Europe (Headquarters of the Council of Europe), Agora, European Youth Center Strasbourg (all Council of Europe premises) and Lieu de l’Europe, all located in the European institutions quarter of Strasbourg. In my case I was primarily in the Palais and the European Directorate for the Quality of Medicines room 300 (EDQM). 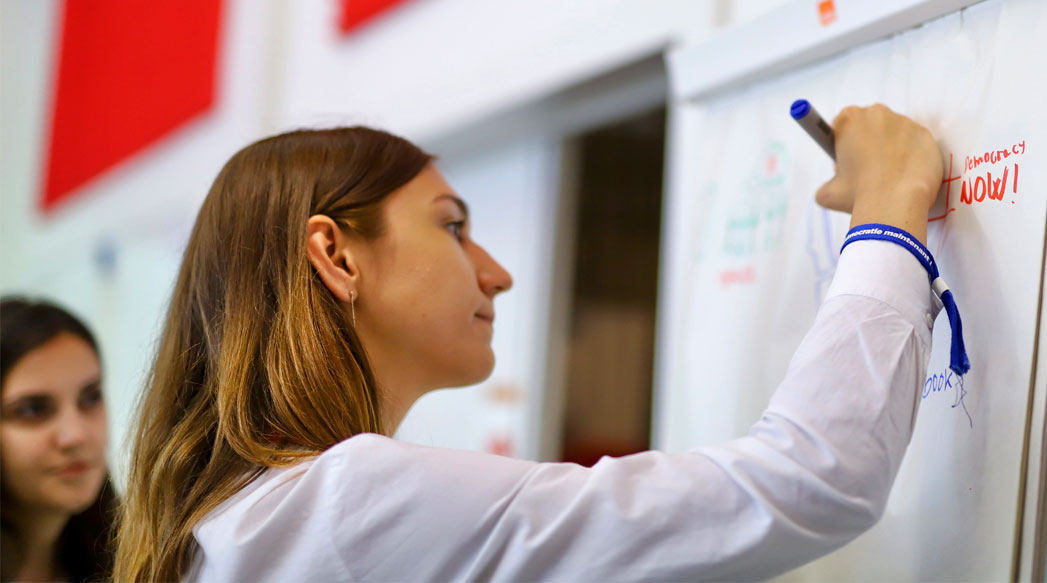 “To me democracy means empowering people, no matter where they come from or how they define themselves” – Maria (Italy)

The programme featured plenary sessions and was based on working groups organized according to the three main themes of the campaign. The young people and their organizations explored the topics of A) revitalisation of democracy, B) youth participation and C) digitalisation. Concretely I was in A7 which was “No Hate Speech”. Furthermore, in the framework of the Youth Action Week, a meeting of the local peace camps organizers also took place and in my group, consisting of 13 people from around Europe, which offered the possibility to present various projects from several organizations such as the NGO Promo-LEX in the Republic of Moldova.

I personally had a chance to communicate with different people from a wide diversity of countries about challenges of democracy, on perception of the Russian-Ukrainian war in each respective country, and on the level of youth involvement into decision-making.

The week resulted in 50 proposals for action, including recommendations addressed to stakeholders to revitalize democracy and support the meaningful participation of young people in democratic processes and institutions. This Call for action will be the basis for following up the campaign at the European and national level.

On the first day, I registered at the European Youth Center Strasbourg and then I went to my hotel which was a ten-minute walk from there and was called Centre Culturel Saint Thomas and I was going to have breakfast there for the rest of the week. The Youth Center was where I had dinner this first day and I remember it with a smile on my face because it had many facilities for ourselves to enjoy such as a piano, a billar, table football, open-aire group activities such as petanque and even one day we painted an LGBTIQ flag with the help of a professional graffiti artist! Moreover, there was a garden where one day we listened to rappers, poetry and also danced as part of the evening programme. Thanks to it I got to meet the rest of the members of the Spanish delegation who also were staying at the same accommodation as me. During the rest of the week, we spent most of the lunch breaks and the free time together along with some members of the French delegation who were locals from Strasbourg so we managed to visit it with them as guides. For me it was the Little France I especially liked. 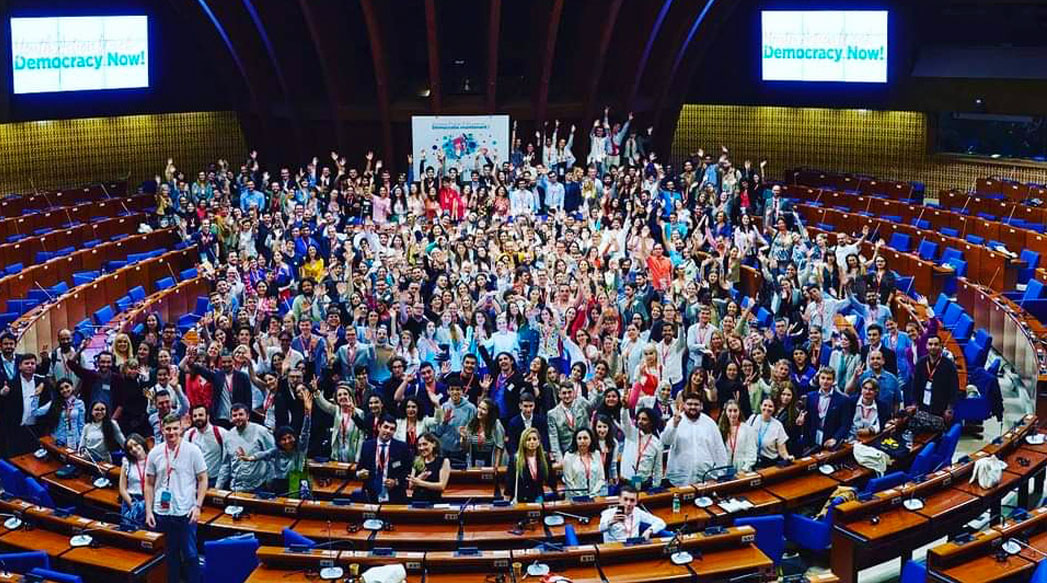 “Democracy is youth’s future. To participate is to change the world. For some, changing the world is an utopia. For me it’s a project” – Muhammad (France)

The following days – after the official opening at the Chamber of the Parliamentary Assembly with Marija Pejčinović Burić, Secretary General of the Council of Europe; Ambassador Breifne O’Reilly, Permanent representative of Ireland and Chair of the Ministers’ Deputies; Jeanne Barseghian, Mayor of the City of Strasbourg; Spyros Papadatos, Chair of the Advisory Council on Youth – I gathered with the rest of participants of my workshop in particular to focus on the challenges, threats to democracy today and the role of young people in revitalizing it, including sharing of practices on the themes of the campaign. Apart from that, we also had plenaries with group A in general -in parallel with B and C – on the themes of the campaign, mine being revitalizing democracy in the Palais de l’Europe in order to develop later on the Pledge for Action.

In the thematic workshops we reflected on how hate speech shapes how we perceive our environment and what I really appreciated was the fact that everyone could have a say on the debate and I talked about the tension there is particularly in Catalonia regarding the independence and separatism issues and what happened in the 1-O. Other colleagues suggested that more should be done in the matter of bullying, both in the school and the workplace spheres, social media companies should establish some sort of regulation of the comments they receive from the users and finally, encourage national governments to create a legal framework in order to prosecute the activities related to this topic by also adding a campaign against it. Besides, we also had the chance to attend a lecture by a researcher who explained to us the definition and other aspects we needed to know about the campaign of No Hate Speech. Furthermore, our facilitator/trainer made us play games to break the ice and get to know us better. One of them was each one of us had to pick three cards from a stack with words related to hate and we had to make up a story where the three appeared with some sort of connection. Another one was the card game “Cards Against Humanity” so as to realize what kind of jokes or funny expressions make us laugh so as to identify the hate speech components that are present in them and I got surprised by the fact that many jokes come from unconscious hate speech we are surrounded by. “For me democracy means participation. Participation in our society. And in that, youth participation is very important because we are the voices of the future, but we are also members of today’s society” – Elias (Sweden)

We became aware of how intricately connected they are all through this exercise. We discovered ourselves encouraging one another, relating the difficulties, and highlighting the necessity of overcoming them collectively if we wish to achieve genuine freedom of speech with some restrictions. The statement “we may all stand up for the cause but if there are no open doors there is not much more we can do as young activists” particularly struck me because it emphasized the need to reconsider the paradox of tolerance and the opportunity that the Youth Department gives is this open door. Who are the performers of such change and difference we are inspired to make? We need to be willing to communicate with everyone, from local government to international organizations, not to mention civil society.

To conclude, we reflected on the proposals and follow-up with Roderick O’Gorman, Minister for Children, Equality, Disability, Integration and Youth, Ireland; Silja Markkula, President of the European Youth Forum (tbc); Miriam Teuma, Chair of the Joint Council on Youth (tbc) and in the evening we had dinner at L’Ancienne Douane (City Centre) where we had the opportunity to taste the bouchée à la Reine and we finalized the week with a party at the same place. On the day of the departure I took a train to Paris and then a plane to Barcelona’s El Prat airport. What I take from this astonishing although only one week long youth action experience are the shared conversations while walking Strasbourg’s impressive streets and the widespread motivation of all present there to actively raise awareness of the world’s current concerns regarding the youth and fight for our equal treatment in political and decision-making spheres as there are aspects that involve us directly to which we have no voice in.