Being a volunteer is not only investing in yourself but also in the environment you would like to live in. It means constantly challenging yourself, your comfort zone and what you thought you knew about the world that surrounds you. I was more than happy to go through this process while co-facilitating the Erasmus+ training course “Peaceweek: Strengthening the youth response against LGBTQIA+phobia”, which took place between 16th-23rd of July 2021 in Barcelona.

Although I participated in a variety of training courses and volunteering projects, facilitating one from the beginning to the end was an experience at a whole new level. Going through the content preparation, adaptation, feedback and every single kind of emotions before and during workshops, made me grow in ways that I did not even fully process yet. The aim of the project was to define and tackle the phobia that exists towards the LGBTQIA+ community and to strengthen the response we have towards it through activism and visibilization of the context. In order to achieve this, 12 people from different European countries and with a variety of backgrounds and experience in working with the LGBTQIA+ community, came together for a week-long training course. The result of their work and their passion can be seen through the outcome of the project, which was a visual and open exhibition composed from work pieces on the topics related to the impact of the phobia against the community (e.g. conversion therapy, LGBTQIA+phobia around Europe, resources recommendation etc) as well as tools to combat it. It was both a fun and heavy project to create as it involved stories and facts with different levels of depth and visibility. Thus being said, a safe environment was created from the first day through the writing of a group agreement, the constant feedback and the bonding outside of the sessions as it was imprescindible for the atmosphere inside of the workshops and the general well being of the participants. 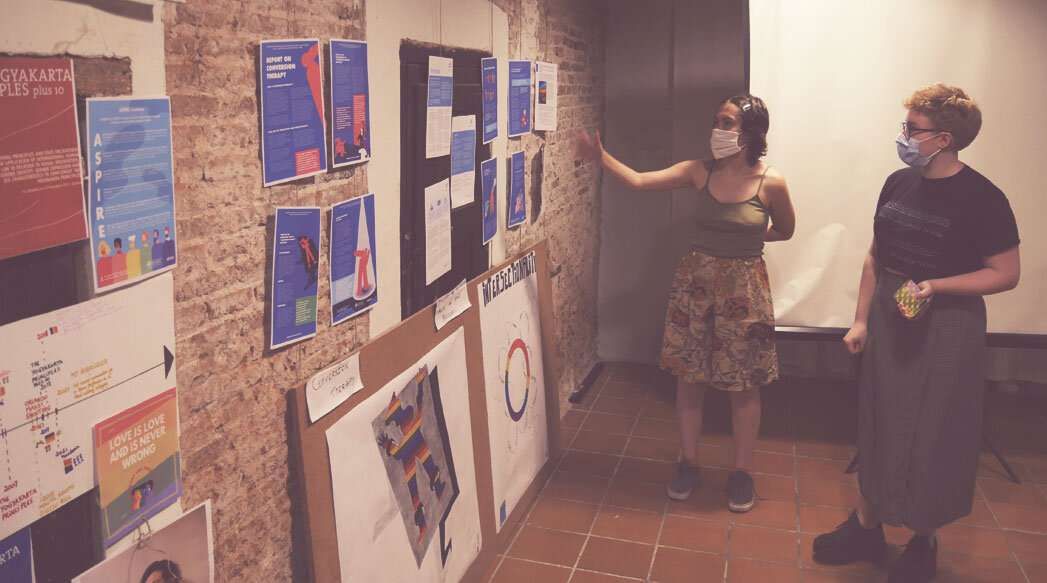 Preparing every session was both a pleasure and a challenge as our purpose was to have as much input from the participants as possible because in our vision, they were co-creating this project too. It was theirs just as much as it was ours. We introduced care-work, conducted regular check-ins and offered the alternative of skipping activities if they became too personal or triggering for anyone. Therefore, the outcome of every workshop always had a surprise element. Despite all the preparation of the content and purpose of the workshop, we never knew in which direction the discussions could go or in what ways the participants wanted to make their voices heard. The level of trust they managed to cultivate, offered them the space to express themselves in ways that made everything so interactive and so much more enriching.

As one of the facilitators I can only say that the amount of knowledge I gained can’t even be put into a few words but the visual exhibition and the photos of the project will speak for themselves.