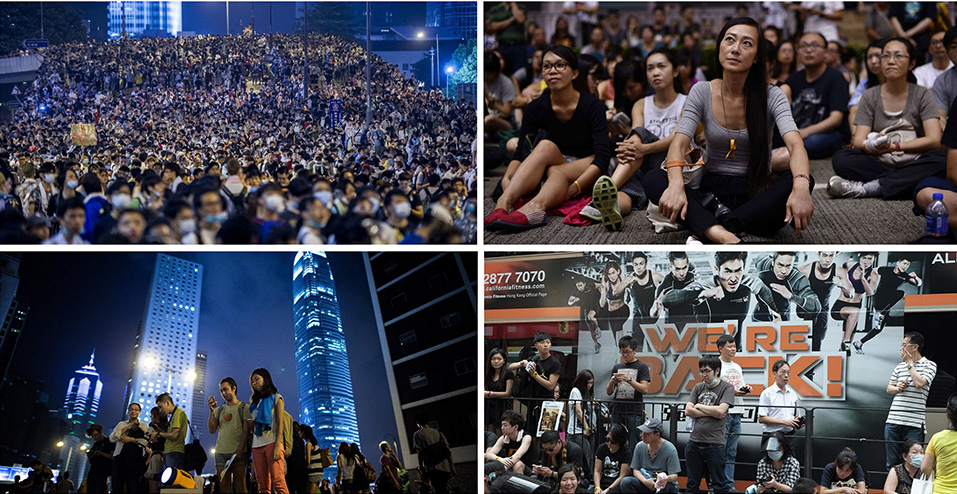 The Beginning
September 22nd, the students’ strike started. We had no idea what was going to happen at that time but only be told that several courses might be cancelled. Around the campus, banners started to appear everywhere saying “we want democracy!”, “universal suffrage should be implemented!”, “take back your decision, NPC (National People’s Congress)!”

The Proposal
National People’s Congress enacted a new proposal, which allows Hong Kong people to vote for their Chief Executive in 2017. However, the proposal is to select 2-3 candidates by the nominating committee and then people of Hong Kong can vote in order to elect the Chief Executive.

There are 1200 members representing different sectors of the society in this committee. They are appointed by Beijing and there is a growing sentiment in the Hong Kong society that the majority belongs to pro-Beijing parties, so that the new proposal is regarded, as “fake universal suffrage” although us mainland students believe it’s a progress of Hong Kong’s democracy and universal suffrage needs to be realized step by step.

Hong Kong students are concerned about the new proposal and the Federation Student Union called on a massive students’ strike for one week among all colleges and universities. Their goal was to press both Hong Kong government and NPC to reconsider the new proposal. As student leaders expected, most colleges and universities responded to the appeal. At the universities there were almost only mainland and exchange students attending the classes last week.

The Boycott
The slogan of this class boycott was “boycott the classes but not boycott learning”, which was actually practiced very well. We were invited to attend civil lectures related to democracy, universal suffrage, and human right in Tamar Park.

The Protest
As noted above, the one-week strike went on pretty well. However, on the last day of students’ strike, some student leaders proposed to surround the government building because the Chief Executive had no response to their earnest appeal of the political reform so it was eventually turned into a protest in front of the government building and soon spread out to Central, Causway Bay and Mong Kok.

Large crowd of students marched from Tamar Park to government building in Admiralty.  They soon occupied the People’s Square nearby, which is a public place. This action drew public’s attention. “Occupy Central Movement” which is a separate group was planning to hold a mass rally on the 1st of October and with students protest in front of the government building they “Occupy Central” also joined the protest in advance of their plans.

(Occupy Central aims at universal suffrage as well but it is a separate movement from students’ strike before the besieging happened.)

More and more people gathered at People’s Square, the crowd extended to the government building. Police were soon involved and they used pepper spray to disperse people, but obviously it did not work and police started to use tear gas to scare people to leave. The only impact of tear gas was nothing but made the public angry about the police’s use of violence against the students. The protestors put on masks and raincoats and kept marching. They used umbrellas to cover themselves and it soon became the “Umbrella Revolution” attracting thousands of more people in the following days. Some people stayed days and nights at the site, including my schoolmates.

As my friends and I observed, the protest didn’t get strong support (more than 100,000 protesters, estimated) until the police tried to disperse the crowd. The noise, the white smoke, gave not direct physical hurt but psychological. Hong Kong people were called for being united, and fight for their own rights.

The people who support the protest are mainly from academic fields. They drafted four goals for this “umbrella revolution”: 1. Let protesters pass through the main fence around the Government Building; 2. Dismiss of the “political reform officer group”; 3. Reject the decision of NPC; 4. Enact the law of Universal Suffrage.

The Situation
What is the most admirable is, until now, no violence was taken from protester’s side, as the slogan says “Occupy Central with Peace and Love”. People are well behaved and the whole protest is well organized. Protesters can get sufficient water and food, and logistics is ensured in accordance to people’s needs. However, due to the silence of the government, more residents are getting involved. I noticed that my local friends call on everyone’s participation and they go there mostly for supporting their friends.

As the protest escalated, up to now, no actual achievement has been reached. Many of my friends get tired and frustrated and start to rethink about their ultimate goal. We found most people forget the big picture because of the emotions and small things.

Beijing government has showed their determination of keeping the former plan unchanged. And the Hong Kong government keeps silence though they said, “we are always willing to hold talks with protesters.” More police are mobilized in case of new waves of protest and people’s attacking the government building.

The Conclusion
All in all, this protest exposes some social and political problems to the public, including local’s complaints about narrowing freedom of speech, freedom of press, increasing immigrants and decreasing sense of HK identity. It is to some extend meaningful since I found my local schoolmates start to think about the value of democracy, the practice of universal suffrage. We as mainland students, fully respect students’ courage to participate in the “democratic collation”, but on the other hand, when a massive social movement happens, not many people can stay calm, stay rational and reasonable as observed.

From SCI’s point of view, we are dedicated to promoting peace. We are glad to see protesters did not resort to violence and police are not really antagonistic to their people. The current situation is so volatile though, what will happen next is still unpredictable, because of the prolonged social disorder already caused some loss to the local economy, and conflict within residents began to rise due to the inconvenience caused to their daily life. We don’t think military forces will be used and troops will be mobilized. Government is inclined to talk to Federal Student Union. We believe that only understanding and compromise can get everyone out of the current dilemma.

Written on 3rd of October 2014 by Jessie Huang
A mainland student studying International Relations at
Hong Kong Baptist University, and a SCI volunteer