Service Civil International has promoted a culture of peace for more than 100 years through the organization of international workcamps. Environmental workcamps have always taken up a significant share of all projects, and many initiatives were taken to put environmental issues at the forefront. Still, in 2014 SCI launched the campaign “A climate for peace” to make the link between climate change and peace more visible and to make it a priority within SCI’s peace work. The campaign highlighted the work SCI branches and partners are doing to mitigate climate change and raise awareness about the issue. As an answer to the call for action, the SCI MIDI working group developed the Erasmus+ funded project “Youth Green Deal” to create common actions in the Mediterranean region because, as one of the members was saying: “Climate Change is a problem that is constantly evolving over this century and beyond. It becomes evident that human activities are making weather much worse, from rainstorms and floods to intensive heat, and we must act”. So, it is not speaking out of turn to say that climate change is perhaps the most significant challenge that humanity has faced in the last centuries.

Although experts had been warning of climate change disasters, it was not until 2014 that several scientists started talking about the 6th mass extinction. To understand the gravity of the situation, we must bear in mind that the 5th massive extinction was 65 million years ago with the dinosaurs. While natural tenets caused the latter, the former was the first mass extinction ever caused by human activity, meaning a turning point in the planet’s history. 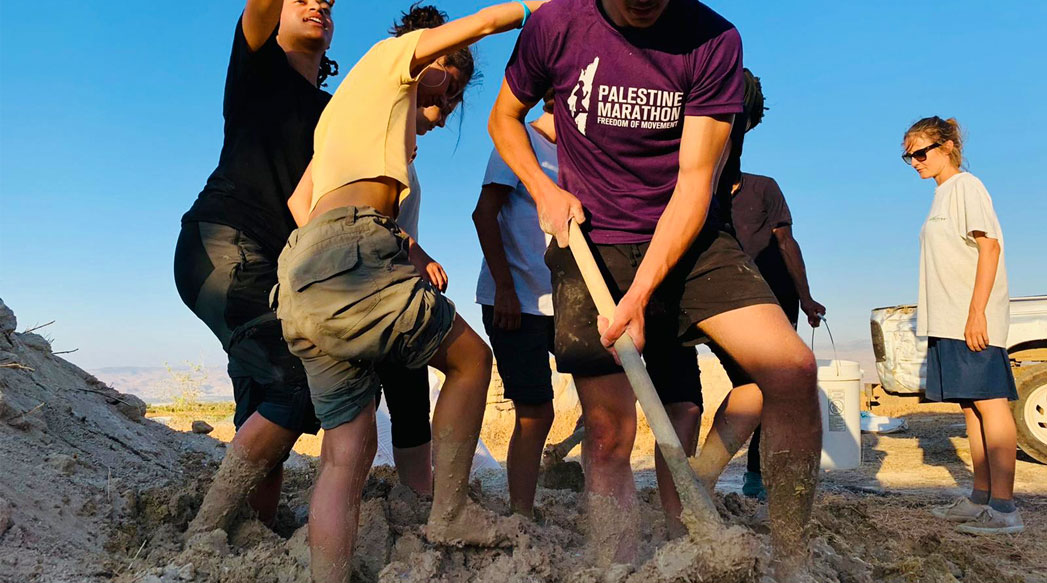 The Youth Green Deal (YGD) project, putting climate justice at the center of cooperation in the Mediterranean area, was an excellent response to such a pessimistic scenario. SCI Catalonia, SCI Belgium, SCI France, and SCI Italy, together with partners from Tunisia, Morocco, Jordan, and Palestine, worked to improve and promote environmental work camps for the youth as an instrument to support climate change mitigation and regenerate biodiversity. In collaboration with different grassroots organizations from both sides of the Mediterranean, the organizations were testing a new model of eco-volunteering, empowering young voices and engaging them in climate justice actions while working on environmental preservation. The main goal of the eco-camp in the West Bank I participated in was constructing an eco-village in a valley between Al-mascara and Arab alSham’a, about 10 km south of Bethlehem. For me, this opportunity to take part in such an eco-camp, in reality, beyond my own Western experience, opened my eyes and gave me a new look at our Mediterranean climate issues. I could see the current illegal occupation of Palestine with my own eyes and how this affects people’s lives and the environment.

Our local host, Jawad, showed us around and explained that his ambition was to re-introduce traditional construction methodologies —-such as cob brick houses— combined with contemporary sustainable methods to supply poor-resourced communities with affordable permanent structures using the soil beneath their feet.
For Jawad, the eco-village is a way to face climate justice and the current political issues in Palestine. If we come back to the years of our grandfathers —he says— before this political crisis, we could see how simple the lifestyle was. They were using this type of materials, and to build this eco-village means bringing back our heritage and the Palestinian identity, which the occupation is trying to erase.

Additionally, he defends the idea that a greater connection with the earth and inner peace are intimately linked; “working as farmers, spending the entire day on your land, etc., is what made my grandfather’s times so special. While we are connected to the phone, they were connected to the land. To bring back this lifestyle is also a way of resistance. I want to bring youth back to this inner peace, for the climate, for politics, and for our health,” he says. 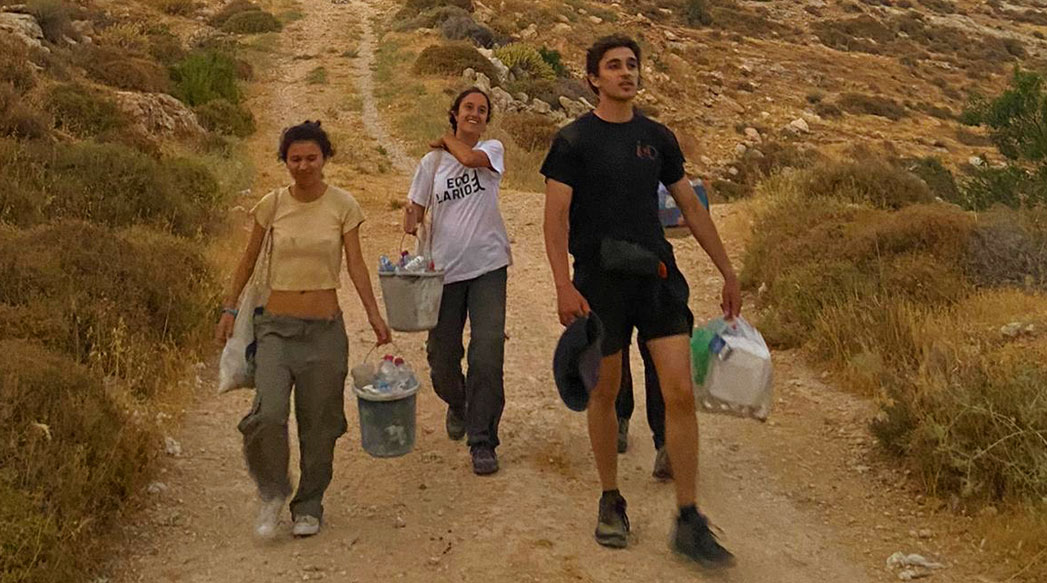 From the beginning, Jawad excluded violence as a means of resistance to the occupation. He argues that violence is the alternative that weak people use to not look eye-to-eye with the victims of crimes that can in any way be justified. Only through dehumanization and disconnection can they do so.
Jawad contacted Rasheed, a Palestinian farmer living in Bardala with a long history in eco-construction as a means for non-violent resistance. He taught us how to prepare the mixture of loam, mud, sand, and water that, with the use of frames and sun heat, would turn into resistant brick structures for future generations, preserving their identity under occupation in a context of scarcity of resources.

But as mentioned earlier, beyond an action to mitigate the effects of climate change and stay in line with the 2030 Agenda, sustainable construction becomes a strategy to enhance the possibilities for indigenous communities — who are under constant risk of eviction by the colonial state of Israel— to preserve their legitimate land.
One of the greatest lessons we volunteers brought back home was a real connection with this place, Palestine. We are used to hearing about it but don’t know it. When you finally come here, you taste Palestinians’ normality: checkpoints, apartheid, occupation, water shortages, etc. Although enjoying white privilege backed by a European passport, many of us were a bit afraid to face this situation before putting a foot on Palestinian land. Yet our experience there for ten days is far from similar to that of the Palestinians. To live every day under occupation is something impossible to describe.

The involvement of locals in every step was perhaps what made this experience so unique. The eco-camp also included the opportunity to meet people from Hebron, Jericho, or Bethlehem. We were finally putting a face and a name to all those stories we vaguely heard about on the news. One of these stories was from Abu Deya’a and his family, who lived between Hebron and Bethlehem. His eight-year-old kid was teaching us permaculture techniques. At such a young age, he could work his family’s land and take care of the farm in case his father would not there anymore. A necessity with all the detentions and everyday problems people face under occupation. Another story was the one from Rashed Al Kadiri and the Jordan Valley Solidarity project. They managed to construct entire houses out of sustainable materials in less than 24h to avoid demolition by the Israeli government.

These and other stories prove that environmental issues are closely linked to geo-political problems, and if we want to build peace, we need to look at these connections and ensure these are all taken into account. If SCI, as a peace organization, wants to promote global justice, we need to provide young and Mediterranean voices that are present in all debates. Our experience in the YGD eco-camp allowed us to share with other young people our concerns about the future of the planet but also to see the reality of the Israeli occupation in Palestine and the consequences for the environment and the people. We learned about non-violent struggle and the importance of safeguarding the land on which we live. Eco-construction is one practical way to build resistance and to make sure that there is hope for future generations.

In SCI, we are more oriented towards actions, as the original slogan read, “Deeds, not words.” Still, we all know how important it is to dialogue, discuss to change opinions, and find overall consensus on critical societal issues such as climate change. The most important global platform to discuss climate change is the UN Climate Change Conference or the COP (Conference of the Parties of the UNFCCC). COP 27 will be organized this year in Egypt, and SCI is accredited to participate in this meeting. As young activists, we are convinced that we should use this opportunity to raise the voice of young people in this negotiation space, especially young people from the Mediterranean, as the meeting is taking place in Egypt. We hope that SCI will use its accreditation to allow young activists from the Mediterranean area to speak up and defend the values of SCI in climate debates. Climate justice can only be achieved if all forms of oppression are erased, and all people can freely choose how to develop their communities.